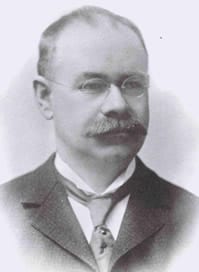 “In recognition of an inventive and entrepreneurial spirit”

The Herman Hollerith Endowment was established in the spring of 1999 by Dick and Romy Hollerith. Dick is a member of the Class of 1944. Income from the endowment provides an annual award in recognition of Dick’s grandfather, Herman Hollerith. The award is presented to a graduating senior who displays through classwork, extra-curricular activities and/or non-school experience an inventive and entrepreneurial spirit.

Herman Hollerith was born on Feb. 29, 1860, in Buffalo, N.Y. He was the son of German immigrants who had escaped from political turmoil in their home country 12 years earlier. At school Herman had great difficulty, especially with his English spelling teacher, and his parents soon arranged for home-schooling by the family’s Lutheran minister. Learning easily in that setting, young Herman was able to enter the City College of New York at age 15. Four years later, in 1879, he graduated “with distinction” from the Columbia School of Mines with an engineering degree. In those days, attending college involved not only taking difficult courses in physics, mathematics and chemistry, but also passing highly applied subjects, (drawing, surveying, etc.), and students were required to visit machine shops and factories to observe and understand the practical aspects of their knowledge. Hollerith’s all-around outstanding performance so impressed one of his professors, W.P. Trowbridge, that after graduation he was invited to become Trowbridge’s assistant at Columbia University.

In the late 19th century, immigration caused the population of the United States to change composition and to skyrocket in number, while simultaneous industrialization, urbanization and westward migration occurred. Everyone agreed that the conduct of a population census was both very important and exceedingly difficult, requiring the best available minds and technology. In 1880, Professor Trowbridge was recruited as Chief Special Agent at the Census Bureau, hired specifically to solve the problem of tallying and analyzing the huge amount of information generated by the census of 1880, and Hollerith came with him, employed as Special Agent. While at the Census Bureau, Hollerith met and courted Kate Sherman Billings, whose father was Director of Vital Statistics at the Bureau. 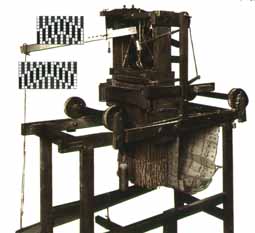 Dr. John Shaw Billings, Kate’s father, was a brilliant man. In later years he became Chairman of the Board of the Carnegie Foundation, founded the National Library of Medicine and the New York Public Library, and he designed and started several famous medical institutions. Dr. Billings quickly recognized Hollerith’s intelligence and motivated him to seek technological solutions to the frustrating problems of data handling which the young man kept bringing up. One day Dr. Billings mentioned that he had read about a French weaver, Joseph Jacquard, who used hole-punched pasteboard cards to guide his looms through their weaving patterns. After two years with the Census Bureau, in 1882, Hollerith decided to quit. He found a position at the Massachusetts Institute of Technology (M.I.T.) teaching mechanical engineering. It took until 1887 for the analysis of 1880 census data to be completed!

At M.I.T. Hollerith concluded that the Jacquard cards would not work for census data handling, but the idea that information could be encoded by punched holes, as well as Dr. Billings’ inspiration and encouragement to solve problems with better technology, remained with him. The first workable solution used a continuous paper strip with two rows of punched holes, which ran over a rotating metal drum. Electrodes traced over the paper as it progressed, closing an electrical circuit whenever a hole in the paper allowed contact with the metal drum. The electrical impulses then advanced an electrical counter. The use of electricity made the system quite fast and relatively jam-proof. Forty years earlier Charles Babbage had designed a similar “analytical engine,” but it was entirely mechanical and steam-driven, and it was never built into a functional machine.

Ironically, during the 1880’s, while developing his punched holes tabulating systems, Hollerith also worked on an electrically activated brake system for trains. However, the railroads adopted a steam-powered brake system, developed by Westinghouse, an advanced version of which continues to be in use.

Hollerith did not enjoy teaching and in 1884 he found a job at the U.S. Patent Office in Washington, D.C. He continued to work at his inventions, patenting them meticulously, more than 30 patents in total. The continuous paper strip with punched holes worked well, but it was difficult to sort separate batches of data, and to return to previous data on the paper tape. The paper also tended to fray and tear after multiple uses. He moved back to stiffer cards and designed a variety of special hole-punching machines to enter data more efficiently. At first he punched cards just along the edges, as he had watched a train conductor do, canceling train tickets. But soon he moved away from hand-operated card punchers to keyboard-operated punching machines which made it possible to use the entire card surface area and to record much more information per card with much less operator effort. As his machines increased in sophistication, they proved their worth in a variety of statistical jobs. During 1884 – 1888 they were used to tabulate and analyze mortality data in Baltimore, New York City and elsewhere.

With the 1890 census just around the corner, the Census Bureau decided to sponsor a competition to choose the best way of conducting it. The test was to record and analyze the population of four neighborhoods in St. Louis, Missouri. There were two other competitors: Hunt’s “slip” system and Pidgin’s “chip” system. Hollerith’s machines easily won the contest and became the official tabulators for the 1890 census. In 1880 only six data points were collected from each person counted. Hollerith’s machines made it possible to record and analyze 235 variables, and to sort the data for every conceivable combination of facts, e.g. 28 year-old men who immigrated from Poland, or veterans under the age of 50 receiving military pensions, etc. While analysis of the 1880 census had taken seven years, Hollerith’s machines finished the job in less than three months, counted and recorded data from a U.S. population of 62,622,250 people, and saved the government some $5,000,000. Afterward, Hollerith received many national and international honors, including the Elliot Cresson Medal from Philadelphia’s Franklin Institute of Science and Technology.

In 1896 Hollerith founded the Tabulating Machine Company, which quickly dominated world markets for recording and analyzing all sorts of data. His much-improved system was used again for the census of 1900 and delivered information, deemed to be of such importance that in 1903, the Census Bureau was established as a permanent institution by an Act of Congress. It began preparing immediately for the census of 1910. Since Hollerith’s company had held a virtual world monopoly on data tabulation and analysis, it had received a very high price for conducting the 1900 census, and the new U.S. Census Bureau began to look for ways of getting around having to use the services of the Tabulating Machine Company and its patents. It hired engineer James Powers, who was somehow permitted not only to build advanced machinery based on Hollerith’s designs, but was actually awarded patents for them. The Census Bureau used Powers’ machines for the 1910 census. In 1911 Powers was allowed to leave the Census Bureau with his machines and his patents, and to start the Powers Tabulating Machine Company. Also in 1911, Hollerith merged his company with two others, (the Computing Scale Company and the International Time Recording Company), to form the Computing-Tabulating-Recording Company. C-T-R had 1,300 employees, and offices and factories in five locations in the U.S. and Canada, but Powers’ competition nearly forced C-T-R out of business.

In 1914 Thomas Watson joined C-T-R as “general manager.” Watson, who was 40 years old, had been vice-president at the National Cash Register Company. (He was forced out after a disagreement with its president about corporate policies). Watson’s managerial and sales skills, together with C-T-R’s excellent technology, quickly turned the tide against all competitors and in 1924, accurately reflecting its worldwide market domination, C-T-R changed its name to the International Business Machines Corporation, (IBM)

In the early 1940’s, Harvard University physics instructor Howard Aiken, while working at IBM, developed the Automatic Sequence Controlled Calculator (ASCC), based primarily on an adaptation of the punched card and tape machines developed by Hollerith. The ASCC was controlled entirely by punched paper tapes and cards. In 1944 Aiken returned to Harvard with his ASCC, donated by IBM, and re-named the Harvard Mark I. Aiken finished the world’s first completely electronic computer, (Harvard Mark II), in 1947; it still received its data input from punched tape or cards.

Herman Hollerith continued to work for the C-T-R company as a consulting engineer until his retirement in 1921. He died of a heart attack in 1929, five years after seeing his ideas form the foundation for the IBM Corporation.

Please visit the Moorestown Friends School library for additional research materials on Herman Hollerith that have been provided by Richard Hollerith.
This page was originally created by Colin Alteveer, the first recipient of the award. The page has since been updated.