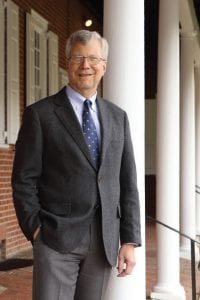 In celebration of Larry Van Meter’s Headship from 2001 through 2018 and in recognition of his family’s three-generation connection to MFS, the Van Meter Camden Scholars Endowment was established by the School Committee as a permanent testament to his vision for and personal dedication to the Camden Scholars Program. More than 300 members of the school community have joined in building this endowment.

Corporate Matching Gift: Many companies match gifts to independent schools. To find out, check with your personnel or human resources department. Obtain the proper form and send it along with your gift. For some companies, the matching gift process is online. The EIN/TAX ID number for Moorestown Friends is 21-0634497.

Questions? Contact Director of Development Steve Zakroff at 856-914-4411 or szakroff@mfriends.org.

The Camden Scholars Program provides opportunities for students from Camden with demonstrated academic potential and significant financial need to receive a rigorous college preparatory experience in the Middle and Upper School at MFS. With the benefit of 40 years of experience and close attention to lessons learned, MFS has developed a truly distinctive program to enable Camden Scholars to succeed.

• The Camden Scholars Program has its roots in the ABC (A Better Chance) scholarship organization. The first Scholar, Seth Garcia, joined the Upper School as a freshman in 1974 and graduated in 1978.
• Scholars are selected after a very competitive and challenging nomination, testing and interview process. Candidates must be Camden residents.
• Scholars receive a nearly full-tuition scholarship. Lunch, books, fees, and transportation are all covered by the school, as well as extras such as underwriting for Intensive Learning travel opportunities.
• The Program was launched by Headmaster Alex MacColl, and has steadily evolved thanks to the leadership of many former and current faculty members including Cassandra Weaver Aldridge, Sam Washington, Dwight Wilson, Mary Williams, Karen Washington, and Tina Corsey. Today, Dorothy López is the Director of the Camden Scholars Program.
• In 2000, the program was expanded from only Upper School students to include seventh graders. Two Scholars now enter MFS in seventh grade and one or two in ninth grade. There are currently 18 Camden Scholars at MFS (4 in Middle School and 14 in the Upper School).
• Scholars have included students of African-American, Hispanic, Cambodian, Filipino, Korean, and Vietnamese ancestry.
• Nearly 120 Camden Scholars have earned MFS diplomas and have then gone to college, including a number who
matriculated to some of the nation’s most selective colleges and universities.

Sonia Mixter Guzman ’02, MFS Parent and Director of Annual Giving
• B.A. Rutgers University
• Operations and Communications Manager, Ronald McDonald House, Camden, NJ
“Nowhere else would I have been more comfortable and happy in my skin. Finding my passions, my dreams, and the strength to pursue them is something I credit not only my parents with, but the teachers who spent countless hours listening to my worries, wiping away my doubts, and pushing me further than I thought was possible.”

Mark Mitchell ’86, Former MFS Trustee
• B.S. Northwestern University
• Vice President, National Association of Independent Schools
“The Camden Scholars Program allowed me the opportunity to attend MFS, which opened my eyes to what the ‘world’ outside of Camden looked like and the possibilities for success that it held for me. One of the key, primary motivators for my work with K-12 private schools is that I have the opportunity to help other schools do for students what MFS did for me, through the Camden Scholars Program.”

Lorenzo Gibson ’12, Member Camden Scholars Advisory Committee
• B.A. Columbia University
• Co-Founder and Principal, Jolt Creative Agency
“MFS played, and continues to play, an integral role in my development as a person and as a thinker. In many ways, this school not only equipped me to be a strong, contributing member of society, but it also informed my perspective as an agent of change. As a Camden Scholar, my identity as a student was situated between two realms: the world as I knew it and the world as it perhaps could be. Because of the ethical training, intellectual discoveries, and general sense of happiness that MFS facilitated for me for six wonderful years, I understand my capacity to impact the world with a profound clarity. Try as I might, I cannot imagine having been as thoroughly educated at any other institution.”